While far from being the only one, Microsoft Word has long been the most widely used word processor on earth. Of course, it’s not fit for every document authoring situation. At 3di we use other tools such as Madcap Flare (by the way, learn how to create Word output from Flare and check out our account of this year’s MadWorld Europe conference!), Adobe InDesign or Syncro Soft Oxygen XML Editor to produce content to address specific customer challenges. But it’s Microsoft Word that most office-based workers get to grips with on a daily basis.

We are all creatures of habit, and this extends to the software tools we have to work with every day. After we have learnt how to achieve what we need to do most often, most of us rarely seek out new or better ways to do things, even if they could save us considerable time or stress.

Imagine that: if wrangling Word is a prominent feature of your working life, and you could discover a few new ways of making Word work better for you, that could mean you are more productive, more helpful to colleagues, impressing your boss, securing that promotion, or simply ending your day less stressed as you head home.

Yes, this blog could change your life.

Sometimes it takes a little nudge to help us rethink how we do things, to give us the confidence to invest a little time with trying out something new. That’s what this article is – a little nudge. Let’s see what Word can do for you if you push it.

By the way, I recognise you may already be familiar with some of these features and even use them every day. Congratulations. Permission to feel smug until you find one you didn’t know about!

If you need a table of contents (TOC), whatever you do, avoid trying to create it manually. Why? Because sooner or later, it turns into a mess. If you’re exceptionally diligent, you may succeed in maintaining your TOC manually for three, five, maybe ten headings. Anything more than that – forget it. Just think of it: any time a heading moves to a next page (because, say, you’ve just added a few words to a previous paragraph), your TOC gets out of date. That’s why the best way is to let Word take care of it instead. How?

The key part is taking care of your headings. This means you’ll need to forget about local formatting and use heading styles consistently.

Let’s say you’re writing a report. For every chapter title use a pre-defined Style, for example, Heading 1. Then, every sub-chapter use Heading 2, every sub-sub-chapter Heading 3, and so on. This way, you get a clear and coherent structure that Word can interpret and make into a solid table of contents.

Once you’ve got your headings sorted out, just place the cursor where you want your TOC to appear and go to References > Table of Contents. Choose the TOC style you like and watch the magic happen. 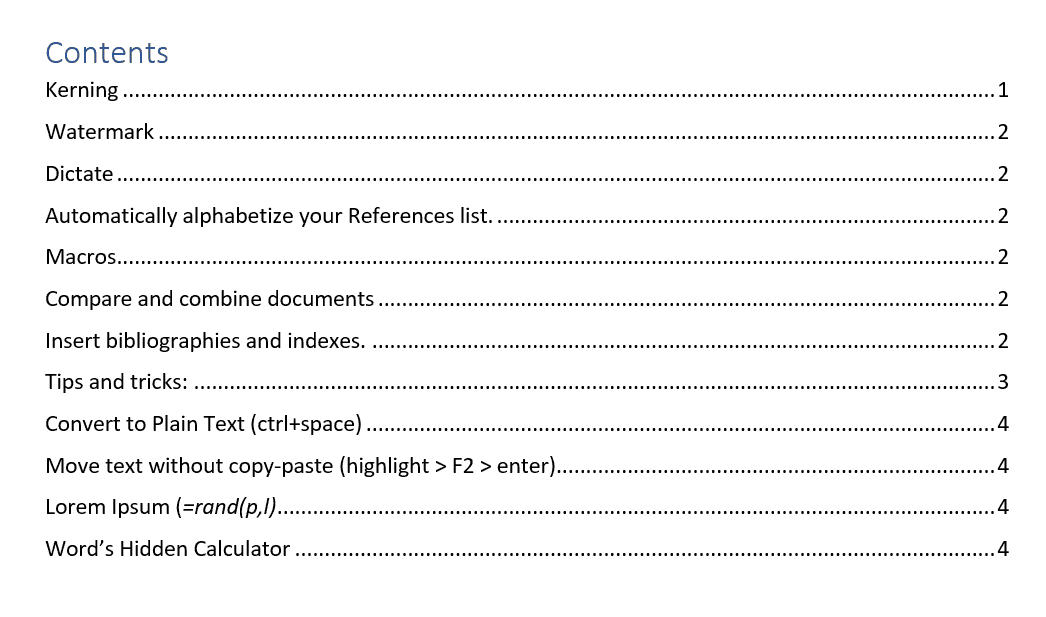 Now, all you need to do is update your TOC (under References > Update Table, or right-click while in the TOC and Update Field) as you make further changes to the document, and stop worrying about correcting those page numbers.

Believe it or not, watermarks have been around since late 13th century (which means they’re older than Gutenberg’s printing press!) so you’d better start using them if you haven’t already. Or at least their digital counterpart.

Here’s an example of a standard “DRAFT” watermark: 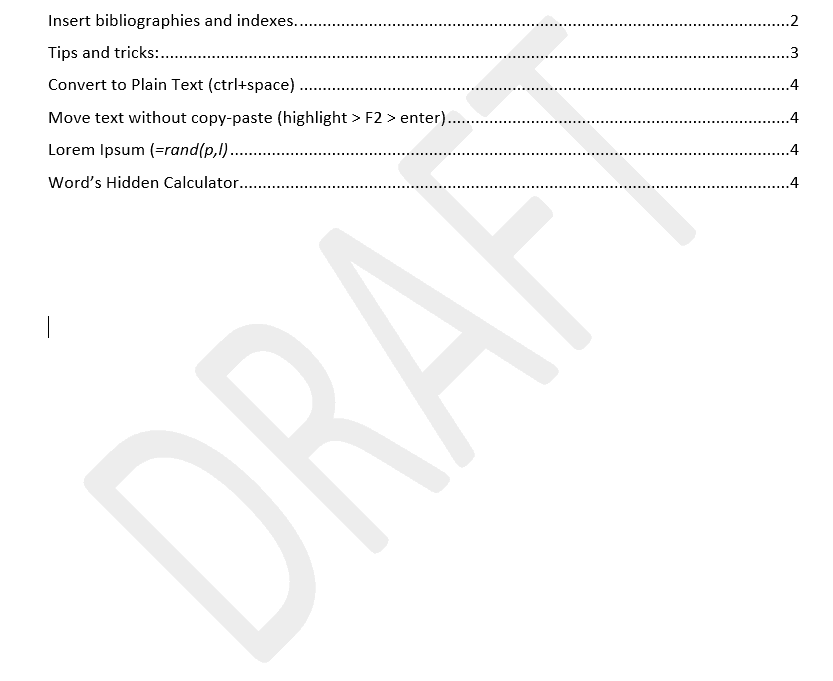 But this is just one of the built-in watermark templates. What’s more important is that Word allows you design or add your own custom watermarks (for example, a company logo). Head to Design > Watermark > Custom Watermark and see for yourself: 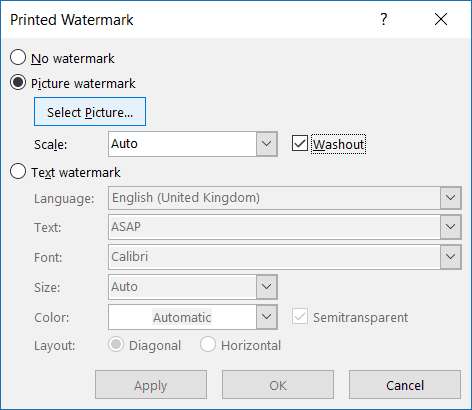 What’s kerning? It’s the process of adjusting the spacing between individual font characters to make them look good next to one another. A classic example includes letters “AV” next to each other:

Word allows you to change kerning manually. To do it, highlight a portion of a text and press Ctrl+D. Go for the Advanced tab and tweak the Character Spacing options, including kerning.

You probably want to ask: Alright, but why would I ever need these settings? Well, although most of us don’t realise it, typography (including kerning, leading, letter spacing or tracking, and lots of other “details”) has an immense impact on content marketing and can simply make or break any message. Three places it could make a big difference are in logo design, website landing page headings, and in graphics with text. When the time comes that you need typography changes, it’s worth knowing you can achieve a lot in Word.

This is a fairly new feature, currently available only to Office 365 subscribers.

Under the hood, it’s a technical miracle of Microsoft’s deep-learning speech recognition software. But on the surface, just hit Dictate and start speaking. Word turns your thoughts into text. The list of supported languages includes English, Spanish and Chinese, but will probably grow: 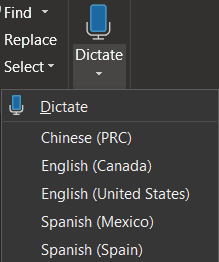 This one is a simple trick saving a lot of time. Say you’ve got a list of 60 references for an academic paper. You’re adding them as they go, not thinking about any particular order. Then, days later, you realise they need to be sorted alphabetically.

What do you do? Instead of spending a pleasant hour doing it yourself, highlight the references list and go to the Home tab. In the Paragraph section, select the Sort icon and adjust the settings: 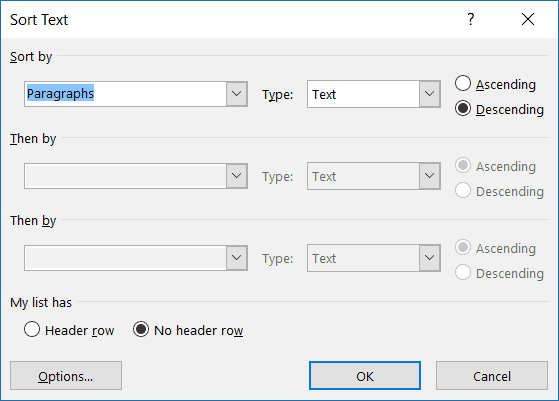 If you find yourself performing the same, repetitive actions in Word, such as adjusting complex table formatting or adding boilerplate text across different documents, you should start using macros.

A macro is a set of tasks that you group together into one single command, so that you can do them all “with a single click”. Imagine, for example, that you press Ctrl+Shift+D (or any other key combination of your choice) and the document immediately has page numbers and dates set just the way you always do it. Cool, isn’t it?

To create your own macro, you need to record the actions you want Word to perform. Go to View > Macros > Record Macro. 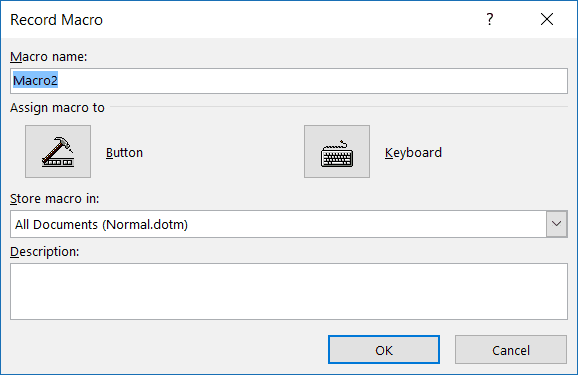 For details, check out the Microsoft support article.

The review capabilities of Microsoft Word don’t end with tracking changes. A great example of that is comparing two different versions of a document in one window, right next to each other.

To do this, go to Review > Compare > Compare, and select the documents you want to analyse.

This comes in handy when you realise that another person working on the document forgot to turn the Track Changes feature on.

If you’ve ever struggled with maintaining a list of references for an academic paper, you know what a pain this may be. But here’s the good news: Microsoft Word does it automatically.

For example, the built-in Source Manager allows you to build, maintain, sort, edit and preview the list of all your references in the most common citation styles, including the latest editions of APA, MLA, Chicago, and lots of others most of us have probably never heard of. 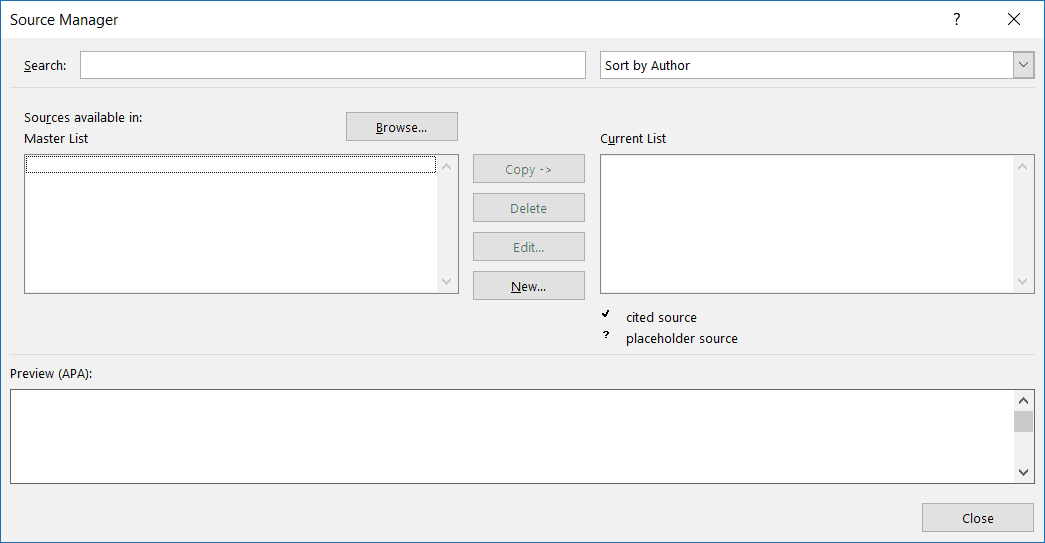 If you want all your company documents to follow the same pattern or enforce consistency on colleagues, what you need is Word templates.

First, open a new document and create the elements that you want the template to replicate each time. Take care of formatting, styles, watermarks, boilerplate text, borders, colours – anything that you want to preserve in any other documents using the template. Once you’re all set, go to File > Save as, and save the document as one of the Word Template files, for example DOTX.

Apart from major features, there are lots of useful keyboard shortcuts and minor tricks you can use to save your time and make your work easier. Here are just a few examples:

So, have you felt the nudge? Maybe you’ve been having a play with some of these while you’ve been reading. Let us know in the comments below your best Word tip.

This has of course just shown you the tip of the iceberg. Although Microsoft Word is much maligned by many professional writers (and it’s not fit for every authoring scenario, as we wrote on our blog before), it is a powerful and surprising tool with tucked-away features that could make small but significant differences to your working day. And if you feel lost, the best starting point is Microsoft’s support portal.